Have you ever visited an English Heritage property, been to the Tower of London or Hampton Court Palace whilst jousting or 17th Century riding displays are on? If so, you may have seen Dominic Sewell or his horses.

Dominic uses a classical dressage system that is 700 years old to train his horses, not many people know that books on training horses go back to the Medieval period, the greatest one being from the King of Portugal Dom Duarte in the 1430s.

In an interview with Jennie Winter-Leach for the Flying Changes Show, Dominic answers your questions live.

Find out about Dominic and how he got into a niche sector of the equestrian world, discover what equitation really is, how the teachings of the dressage masters relate to the present day and whether the tack and equipment they use is different to what was used historically.

If you are interested in meeting the team at Historic Equitation or would like to have lessons on one of their school masters why not follow them on Facebook or send Dominic an email. 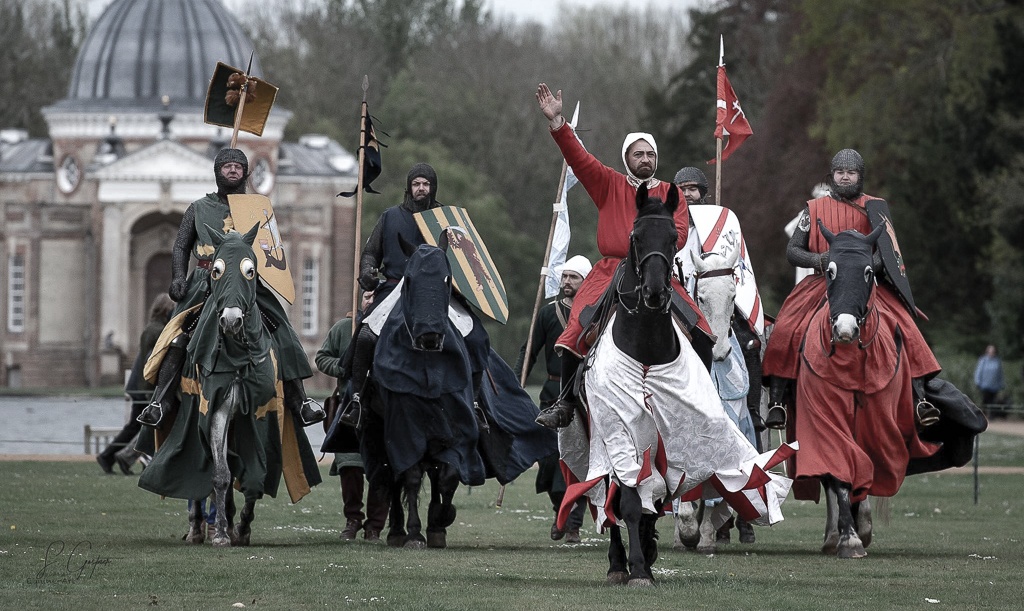 We are delighted to announce that we will be hosting our first evening performance at The College Equestrian Centre at Keysoe on Friday 27th March 2020.

The aim of the evening is to take our audience behind the scenes of Historic Equitation. In part 1, we will introduce our knights and their horses, you will find out what we look for when selecting a horse for the joust. Once we have outlined the temperament and behaviours that we find desirable, we will demonstrate how training begins and what we do to prepare our horses for the sights and sounds of an event.

Our demonstration will not just focus on training a horse to carry a lance and shield but will also focus on horsemanship as desensitisation is only a small part of the horses training. Those who have equine knowledge, or even those who remember the “dancing horses” of the Olympics may recognise a few of the classical movements our horses will perform. We will explain where these movements originated from and why they were useful in battle.

We will be taking a range of horses to the event to demonstrate the different stages of training and the versatility of the different breeds. It is a great opportunity for us to compare what horses were used historically (and how we know about them) with the horses we are using today.

After a short interval our knights will don their armour to take part in a 13th Century Joust and Melee. Watch our horses as they take part in their first evening performance. This is a great opportunity ahead of the event season for the horses to experience a joust and work in a large arena.

We will also talk about the history of the 13th Century joust and explain why it can be run seamlessly on an artificial surface.

At Historic Equitation, we pride ourselves on representing the past, whether our audience likes horses or history, we feel that the Jousting Showcase will have something for everyone.

The Jousting Showcase will be held at The College Equestrian Centre at Keysoe, 19:30 – 21:00 on Friday 27th March. Adult tickets cost £14.99 and Children (under the age of 16) cost £4.99. To avoid disappointment, book your place online today: http://bit.ly/KeysoeWeb. 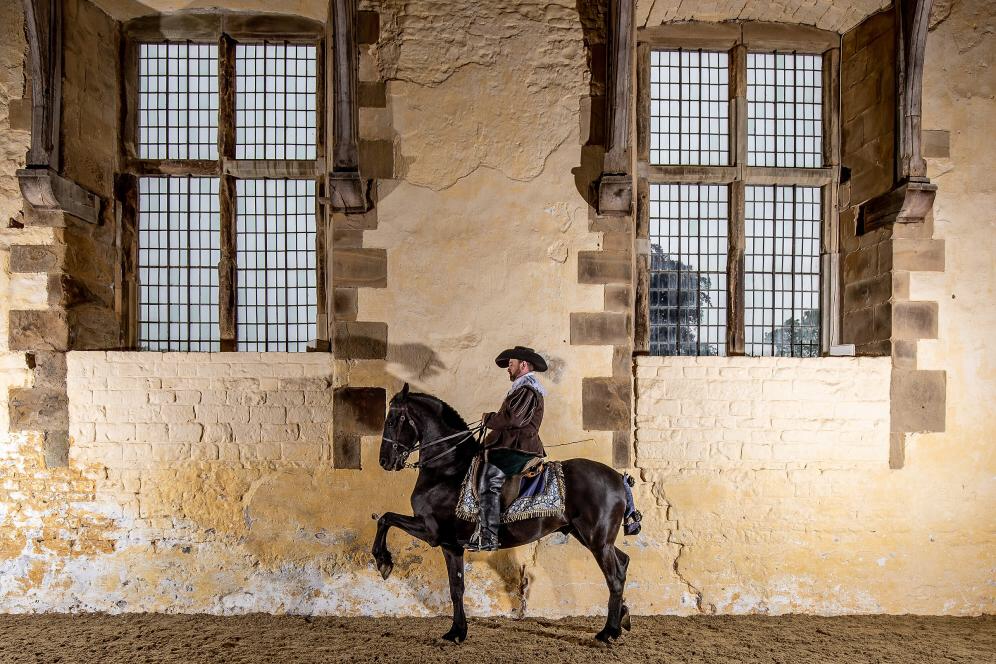 The season has barely started and yet our wonderful horses and riders have been featured in the press several times this year already!

Each day, the News in Pictures on the Times website showcases a stunning selection of pictures from around the World. Back in May, our black Lusitano cross Frisian stallion Faraon and rider Daniel Calvert featured in an outstanding image by photographer Charlotte Graham.

The image was captured inside Bolsover Castle’s riding house, which is one of only four original riding houses still in use in the World today.

You can find the original image and feature on the Times website here: More recently, but again at Bolsover Castle, the English Heritage property in Derbyshire, rider Clive Hart along with his mount Coralito can be seen performing a pesade. This moment was captured by the talented Charlotte Graham earlier this year. If you are a budding photographer or are looking for somewhere to take the family this weekend, then why not see the horses and riders of Historic Equitation at their next show?

We will be travelling back to the Elizabethan period this weekend at Kenilworth Castle where you will be able to see Coralito and Faraon complete to win the Basket of Arms in front of Queen Elizabeth I. You can find more details on the event here. 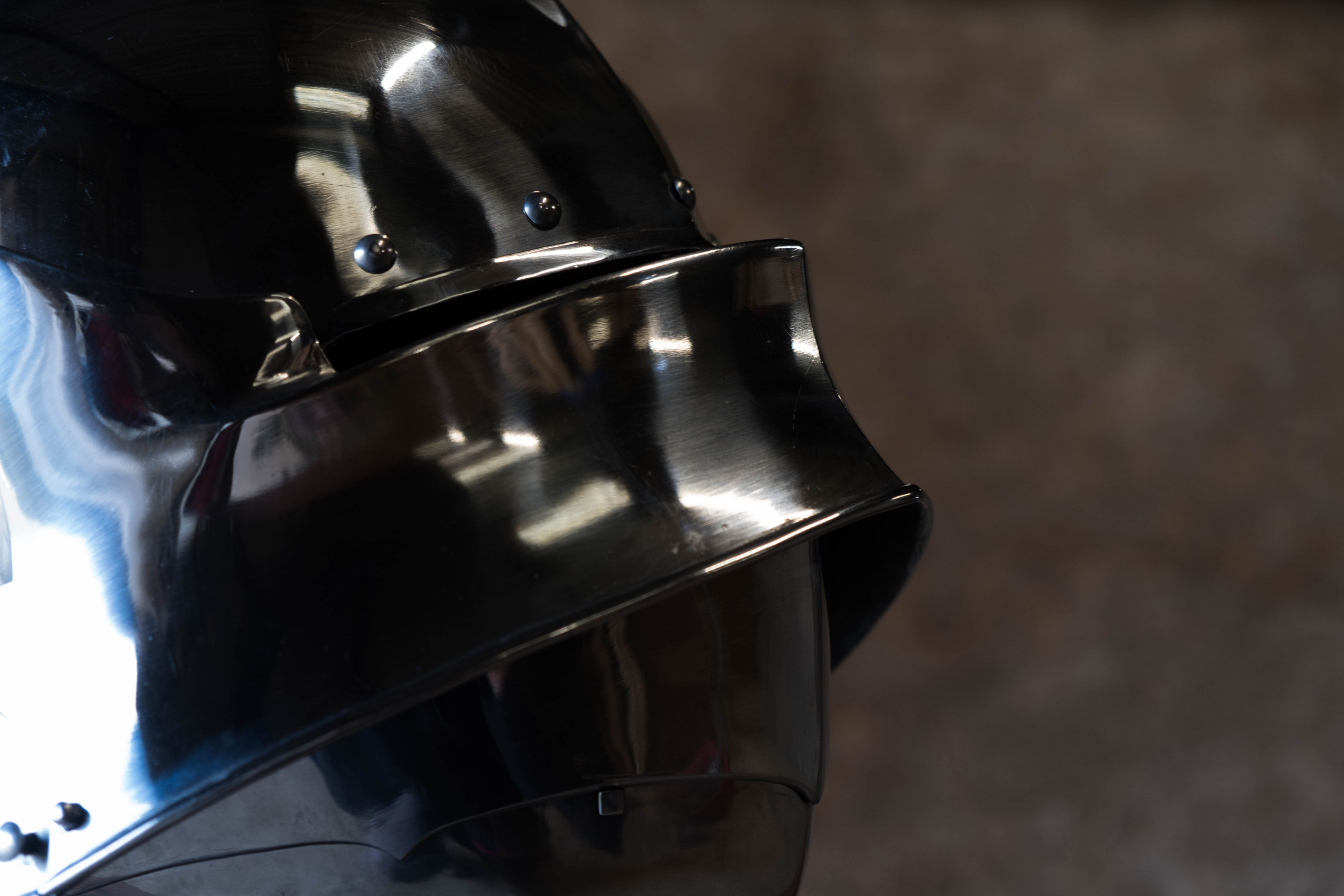 Duke and Hawthorn both made an appearance in a BBC 4 documentary series Metalworks during episode 3 “The Knights Tale” where art historian and curator Dr Tobias Capwell celebrated the great age of armour!

Referencing the unstoppable rise of the Royal Almain Armoury at Greenwich, he tells the forgotten story of how Henry VIII fusedGerman high technology with Renaissance artistry in the pursuit of one aim – to become the very image of the perfect knight.

Using the talents of foreign craftsmen and his court artist Hans Holbein, Henry transformed himself into a living metal sculpture. His daughter Elizabeth I further exploited that image, making her courtiers parade before her in the most innovative and richly decorated works ever commissioned in steel.

During the episode you will see Dr Capwell and Dominic Sewell of Historic Equitation go head to head down the list, where a camera has been mounted on top of the tilt to capture the action of lances breaking at close quarters! 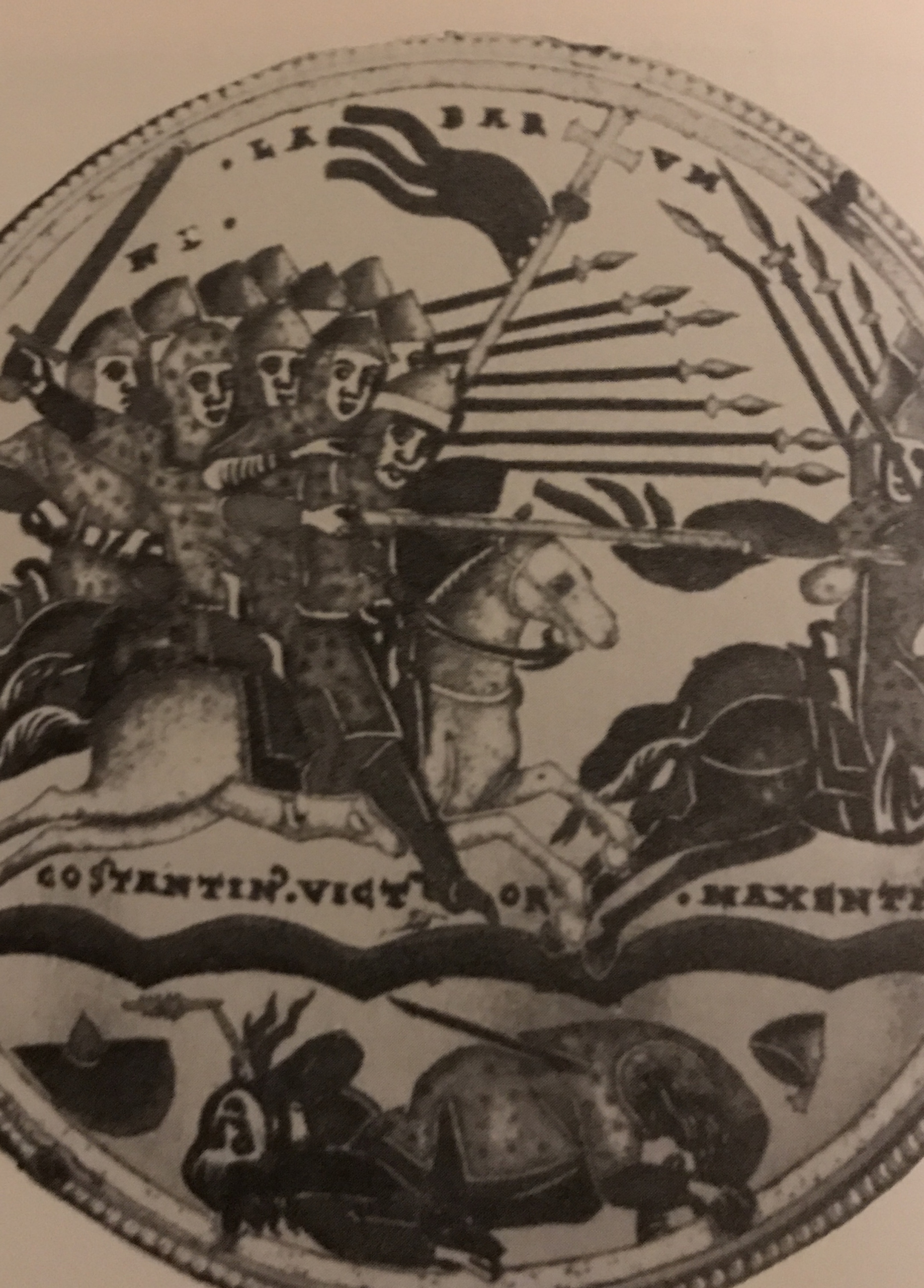 In the thirteenth century, literature of the period treated battles and single combat quite differently. Mass battles are infrequently mentioned in great detail however the combat in the Arthurian romances and accounts of Tournaments are often recounted at great length.

Authors and poets of the time carefully describe the styles of mounted combat. The charge with the “couched” lance that was held in the armpit and across the horse’s neck was a relatively new development that had come about with the use of massed cavalry and the introduction of the stirrup into Europe in the ninth century.

The massed charge was the signal of the start of a tournament and required a great deal of skill to manage a horse, shield and lance whilst riding knee to knee with another rider. The sound of the encounters must have been tremendous! These were difficult a dangerous events where riders would be unseated and injured whilst loose horses were careering across the field, valets would try valiantly to capture them in order to return them to their knight or else be ransomed back to the owner.

Great careers and fortunes were made in the tournaments especially, William Marshall who started out as a second son of a lowly knight and rose to become Regent of England.

A mounted sword fight followed the charge, the tilt or “stechen” was where the real action happened. Here riders exchanged blows and wrestled to take their opponents prisoner and win their armour and horses as prizes The art of using the lance required the rider to strike in two particular places. Firstly amongst the” four nails”. That is, the centre upper shield where four nails held the neck straps and handles of the shield. The second and more vulnerable was to be where the helmet was laced. These blows have been described many times in poems and verse, with maille collars ripped open and helms removed from a single blow to the head,

There was scandal at a Tournament held in England in September 1252 at Waltham Abbey, Essex. Mathew Paris writes in the Chronica Majora that when Roger of Leyburn targeted his lance at the neck of his opponent Ernaut de Montigny. His lance pierced the knights throat and he was killed. Later when the wound was examined the head of the lance was found to be sharp! The Tournament had proclaimed that only blunt lances were to be used.

When the dust and the noise had died down and the knights had returned to their lodgings only then could the cost be counted. In future year’s rules and books would be written to regulate the Tournament but while there were fortunes to be won and lost, young knights would always be drawn to the courtesy and carnage that was the tournament.